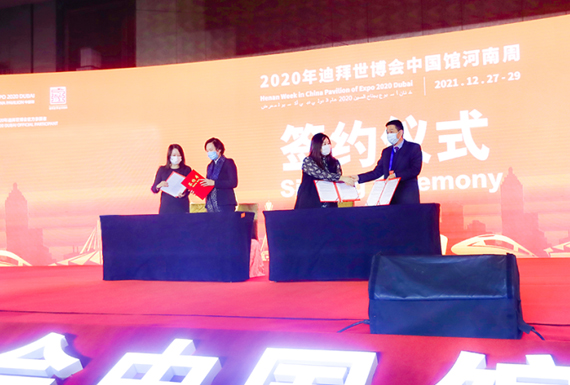 Etihad Airways, and Henan Province Airport Group, the parent company of the Zhengzhou Xinzheng Airport (CGO) — an important domestic aviation hub and the gateway to the central region of China — aim to establish a strategic partnership to strengthen aviation ties between the UAE and China.

Etihad Airways and Zhengzhou Xinzheng International Airport (CGO) aim at together creating the ‘Air Silk Road’ between Henan Province and the Emirate of Abu Dhabi, as well as building CGO airport into an air freight hub in the region.

Martin Drew, Senior Vice President Sales and Cargo, Etihad Airways said, “As the national airline of the UAE, Etihad Airways has played a key role in the transportation of vaccines and medical supplies within and outside the UAE, based on its professional medical logistics solutions. Since the start of the pandemic, Etihad Cargo has operated 1,042 flights out of Shanghai and Beijing, carrying over 65,000 tons on its Boeing 777 freighters and passenger freighters, among which 50% of the flights were medical supplies to support the global fight against COVID-19 and equip frontline medical professionals.”

Driven by the huge demand for medical supplies, Etihad Cargo has performed strongly in the past year. Etihad Cargo has restored 90% of its destinations compared with before the pandemic in the same period in 2019, while its capacity has increased by 20%.

Kang Xingzhen, Chairman of Henan Airport Group Co. Ltd. complimented the cooperation, “Driven by the dramatic growth of Zhengzhou Xinzheng Airport in recent years, the Zhengzhou Airport Economy Zone (ZAEZ) has become the first and, to date, the only aerotropolis in China to simultaneously address business, multimodal surface transportation, airport and urban objectives as an integrated whole. Supported by Zhengzhou Airport’s 51 air cargo routes, the ZAEZ has not only become a manufactured product export dynamo, but also Central China’s largest foreign-origin meat port as well as a leading Chinese distribution point for a multitude of other imported food perishables. We sincerely hope to see Etihad Airways’ scheduled freight flights land into the CGO in the not-too-distant future.”