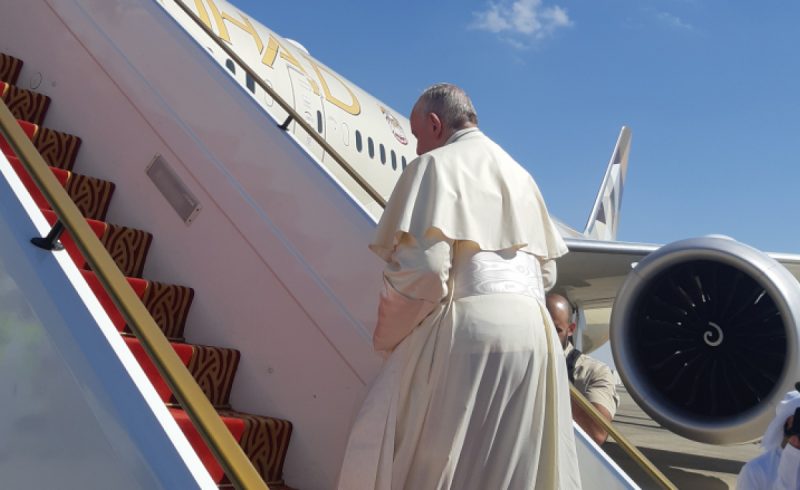 Etihad Airways, the national airlin, has flown His Holiness Pope Francis home after a historic three-day visit to the capital Abu Dhabi. The trip, heralded as a triumph in inter-faith dialogue and a celebration of peace, made world history as the first ever visit of a pontiff to the Gulf region.

Leaving on an Etihad Airways Boeing 787 Dreamliner, the Pope leaves behind a legacy of tolerance and peace. During his visit, the pontiff joined Dr. Ahmed Al Tayeb, Grand Imam of Al Azhar and Chairman of the Muslim Council of Elders for the Human Fraternity conference, a meeting of some of the world’s most prominent religious leaders with the aim of charting a path for global peace.

In recognition of the UAE’s Year of Tolerance, the visit reaffirms Abu Dhabi’s position as a multi-cultural, multi-faith global capital. Etihad Aviation Group, one of the city’s leading employers, echoes this diversity with more than 150 nationalities represented across its 23,000-strong workforce. The Pope’s visit is the perfect opportunity to celebrate the diversity and spirit of co-operation witnessed throughout the company.

The crew who flew the Pope home were comprised of 15 different nationalities, representing the cultural diversity at the heart of the Etihad Aviation Group.

In addition, Captain Paolo La Cava, Director of Etihad Aviation Training, the group’s acclaimed training division has been instrumental in the operation and planning of this important flight.