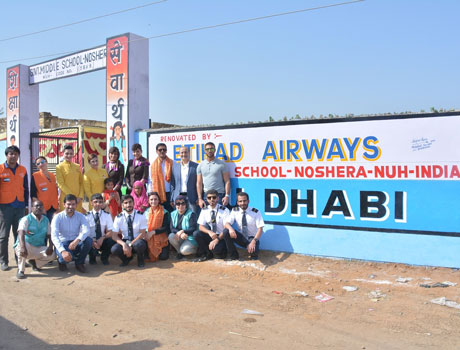 The donation was presented at the official re-opening of the school, which has been fully rebuilt with funds raised by the Abu Dhabi-based airline. Students received over 1,000 school bags, stationery, meals, uniforms, shoes and other garments.

A senior delegation from Etihad Airways presented the donation which was funded through charitable initiatives from staff, including ‘Walk for a Cause’, garage sales and a football tournament held during the Holy month of Ramadan.

The delegation was met by Indian representatives from Mewat district who accompanied Etihad Airways’ team in distributing 1,000 of the airline’s new kids kit to a nursery previously renovated by Etihad Airways. Furthermore, the Abu Dhabi based airline announced a new school library project, to be completed by December. The new educational facility will target 1,000 students ranging in age from 6 to 14 years.