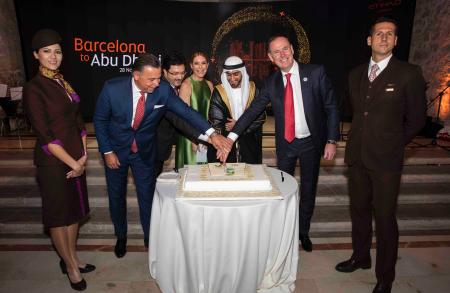 Etihad Airways has celebrated the launch of its new scheduled service to Barcelona in style by hosting a spectacular evening reception at the historic Capella dels Angels, a sixteenth-century Gothic building which is now part of the Museu d’Art Contemporani de Barcelona (MACBA). The event was attended by leading figures from the local government, diplomats, media, corporate partners and travel trade.
The inaugural flight, EY49, arrived in Barcelona from Abu Dhabi yesterday carrying a special delegation of dignitaries, media representatives, influencers and senior members of Etihad Airways’ management team.

The evening also featured an elaborate cocktail reception and entertainment including a video-mapping dance show and a hand-pan band performance.