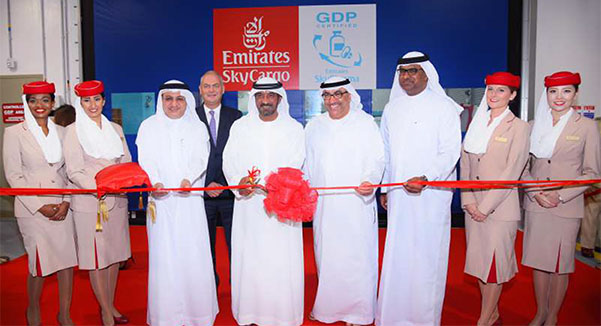 “We have to think about the future,” Sheikh Ahmed said about the company’s investment to SkyPharma, part of the Dh600 million expansion of Emirates cargo facility named SkyCentral at Dubai’s airport. “It’s not about today. It’s not about this year.”

Sheikh Ahmed Bin Saeed Al Maktoum,President of Dubai Civil Aviation and Chairman and CEO of Emirates Airline and Group, told the media at the September 18 launching of Emirates SkyCargo’s new purpose-built facility dedicated exclusively to the timely and secure transport of temperature sensitive pharmaceutical shipments, the project is long-term investment with good intentions.

“We have to think about the future,” Sheikh Ahmed said about the company’s investment to SkyPharma, part of the Dh600 million expansion of Emirates cargo facility named SkyCentral at Dubai’s airport. “It’s not about today. It’s not about this year.”

The opening of the new facility, which was directed by Vice President and Prime Minister of the UAE and Ruler of Dubai His Highness Sheikh Mohammed bin Rashid Al Maktoum, is envisioned to further encourage more companies to connect pharmaceutical markets via Dubai International Airport, a major transportation hub between the East and the West, Sheikh Ahmed said, noting that the UAE is a major hub for the global logistics industry.

Bureau Veritas, a trusted world leader in testing and certiﬁcation founded in 1828, awarded Emirates SkyCargo with the certiﬁcation of compliance under the EU Good Distribution Practice Guidelines (GDP) for medicinal products for human.

This makes Emirates SkyCargo the ﬁrst cargo airline in the world that has obtained GDP certiﬁcation for its hub operations covering two airports and the 24/7 bonded trucking service that connects cargo between them.

Chaouk told Air Cargo Update the GDP certiﬁcation means Emirates is complying with the international regulations in transporting only reliable and genuine pharmaceuticals, thus, helping in the ongoing drive against counterfeit drugs.

“Emirates was already transporting pharmaceutical products. The GDP means its traceability system is in line with the European Union and complying with international regulations, thus, help curb the distribution of counterfeit drugs which are dangerous,” Chaouk said in an interview.

Apart from its state-of-the-art facilities, SkyPharma also boasts of innovations like the White Container, which is coated on the inside with thermal insulators to counteract high temperatures in Dubai and preserve sensitive cargo, the Emirates SkyCargo Cool Dolly—a special piece of equipment that transports cargo from the aircraft to cool storage areas while maintaining temp- eratures of as low as -20 degrees centigrade, among others.

As the world’s cargo airline with the widest reach, Chaouk said Emirates SkyPharma would help more people get access to medications that they need.

Nabil Sultan, Emirates Divisional Senior Vice President for Cargo, said “pharmaceuticals are one of the most important products we transport because of the impact on people’s lives and communities across the world.”

“As a leader in the global air cargo industry, we decided that it was not only important for us to build state-of-the-art cool chain facilities for the transport of pharma products but to also go the extra mile and ensure the compliance of our operations against the highest international standards,” said Sultan.

“Our customers can continue to rest easy knowing that shipping their high-value and temperature-sensitive goods with Emirates SkyCargo is a safe and efﬁcient choice for their business and customers,” he added.

Pharmaceutical products only account for 6 per cent of products shipped via Emirates SkyCargo right now but Sultan is optimistic for growth in the coming months or years.

In 2015-2016 ﬁnancial year, the cargo company saw a 6 percent growth in its airfreight volume to 2.5 million tons.

The global health care spending dipped in 2015 with pricing pressures in the US and unstable economic conditions in Brazil, Russia and China affecting the industry.

But the general long-term outlook in the pharmaceutical industry remains rosy, based on the analysis of the US ﬁnancial research and auditing ﬁrm Deloitte &Touche.

Aging populations, the rise of chronic diseases and the advent of innovative and frequently expensive treatments like cancer would drive the growth in the pharmaceutical sector.

“Although economic woes are stunting pharma sales growth in certain regions, long-term prospects outweigh near-term challenges. During 2015-2019, both global health spending and pharma sales are expected to see positive growth, driven by population aging and expansion and the rollout of improved health insurance and services, particularly in developing markets,” Deloitte &Touche said in its report.

With developing countries like India capable of manufacturing drugs at global standard, more people in remote villages in need of basic health care are also being reached.

About 30 percent of vaccines shipped to the US are now manufactured in India, cutting production cost signiﬁcantly but still requires quality shipment process to keep them in their best state.

Analysts said the availability of cheaper medicines means more people can be reached and more quality air cargo shipments would be needed on a global scale.