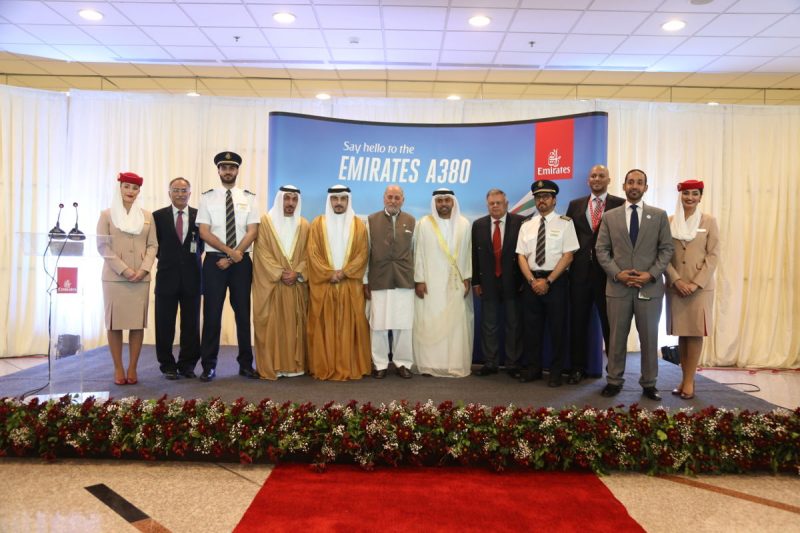 Emirates makes history with one-off A380 touchdown in Islamabad

The Emirates A380 touched down in Islamabad today for a historic one-off service to Islamabad International Airport. This was the first time ever that the iconic double-decker aircraft has landed in Pakistan. The landing demonstrated the airport’s readiness to accommodate the A380, the world’s largest commercial passenger jet.

Upon landing at 1210hrs at Islamabad International Airport, the aircraft was met with a ceremonial water cannon salute, and the Emirates delegation was welcomed by government officials and Islamabad International Airport executives.  After a welcoming ceremony, government officials, VIPs, media and members of the travel industry were given a guided tour of the A380 by Emirates cabin crew.

Sheikh Majid Al Mualla, Emirates’ Divisional Senior Vice President, Commercial Operations, Centre said: “We are proud to have operated this special A380 flight to Islamabad, the first time ever that our flagship aircraft has landed in Pakistan. The Emirates A380 is fundamental to our overall strategy, and bringing this popular aircraft to Islamabad represents a significant milestone in our operations to Pakistan, a country we flew our first ever flight to in 1985. We are very keen to now launch a scheduled A380 service to Pakistan and will continue to work with authorities to make these plans a reality.”

Emirates and Pakistan have a long-standing relationship that spans over 30 years, when the airline’s first flight flew from Dubai to Karachi on 25 October 1985. Since then, Emirates has grown exponentially in Pakistan, and today the airline operates 71 weekly flights between Dubai and six cities in Pakistan: Karachi, Lahore, Islamabad, Peshawar, Sialkot and Multan, offering Pakistani travellers convenient access to over 150 global destinations. Emirates also employs over 5,000 Pakistani nationals as Flight Deck crew, Cabin Crew and in various others positions across the airline.

Hundreds of passengers travelled on the special flight, many of whom had made their bookings specially for this unique flight. The passengers on board began their journeys from 25 countries reflecting Emirates’ global mix of customers who will benefit from this route.

The Emirates A380 aircraft that operated this special one-off service to Islamabad was set in a two-class configuration offering spacious seats in Economy Class and fully flat-bed seats in Business Class as well as Emirates’ popular Onboard Lounge. Passengers in all classes enjoyed free Wi-Fi to stay in touch with family and friends and Emirates’ multi-award winning inflight entertainment system ice with up to 3,500 channels of movies, TV programmes, music and podcasts on the industry’s biggest personal screens in each class of travel.