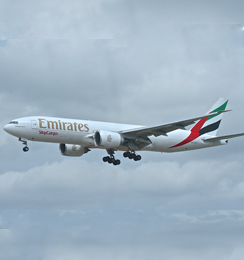 Emirates, Boeing initiates ‘View from Above’

Emirates and Boeing have partnered together to sponsor ‘View from Above’, one of the largest

known as drones. Filming was conducted in 18 destinations on five continents including

was provided by Dubai Film.

Marketing and Brand said, “The beautifully crafted films produced for this project not only

feature destinations within our network in a stunning new light, but also utilises innovative

technologies in creative ways to produce dramatic footage. Our aim is to always connect with

our audiences around the world, and we hope that people are inspired by these unique films.”

“Partnering with Emirates for this project was a tremendously exciting venture,” said Jerry

“The combination of technology, art and innovation to bring about these fabulous vignettes of

Emirates’ destinations around the world is remarkable. We are proud that the Boeing 777 is an

integral part of Emirates’ fleet taking people to all these amazing destinations.”

Keeping safety at the forefront, the aerial capabilities of the drones meant the project team

accuracy, even when operating in tighter spaces, in destinations like Vietnam where drones

grazed rice fields, Norway in between mountain crevices, and over lily pads in the Seychelles, to

name a few. The drones were also able to reach locations that would have been challenging

with traditional helicopter and fixed wing aerials, like deep caves and beneath jungle foliage.

Once such example is Japan, where drones were used to film in between the branches of

cherry blossom trees and closely hover over steep waterfalls. In Rio, drones were able to

Over 13 qualified drone pilots from around the world worked on the filming project, which was

produced and directed by MOFILM.