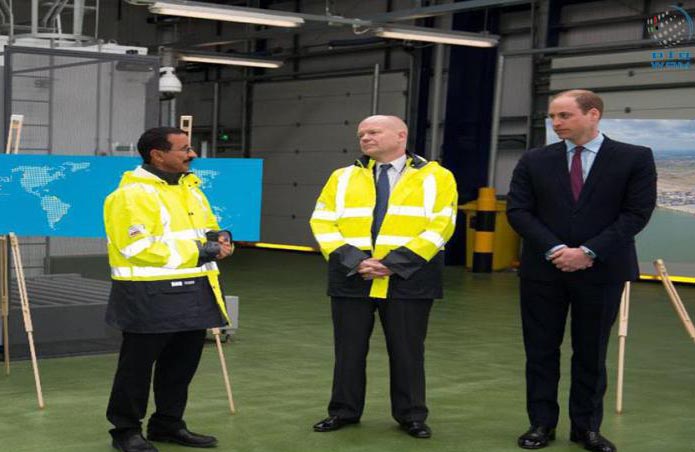 Prince William, Duke of Cambridge, has paid a visit to DP World’s London Gateway Port. He hailed the state-of-the-art facility, which was constructed to the highest quality and standards, and commended the port’s role in transforming UK infrastructure and economy.
Prince William underscored that DP World’s contribution to the development of the ports and logistics industry in the UK adds value to the solid partnership and ties between the UAE and UK.
Accompanied by the Chairman and CEO of DP World, Chairman of Ports, Customs and Free Zone Corporation HE Sultan Ahmed bin Sulayem and London Gateway’s top officials, Prince William toured the facility.
British Conservative MP and former leader of The House of Commons, and Chairman of United for Wildlife’s International Taskforce William Hague joined Prince William on the tour, where they closely learned about the steps taken by DP World to fight criminal wildlife trafficking. The visit was to mark an agreement signed by operator DP World at Buckingham Palace committing the leaders of the global transportation industry to fight against damage to wildlife.
Sultan Ahmed bin Sulayem, said, “We were very pleased to welcome such esteemed guests to our London Gateway facility and show the ways in which we are helping to grow global trade whilst simultaneously helping to stamp out the illegal global trade in wildlife products.
“DP World is proud to be an original member of the United for Wildlife Taskforce and I am delighted that other leading international businesses have joined us in signing these commitments.
“This is a landmark moment in the fight to save some of the world’s most endangered species. As a global ports operator we have an important role to play as a sustainable business, in partnership with customs authorities, in eradicating this morally reprehensible activity.
“Our successful experience in developing and running London Gateway Port is a notable milestone in DP World’s portfolio. We look forward to investing more at the port and its logistics centre.”
The location of the DP World London Gateway Port, which has 16 million consumers within 50 miles, enables imports to enter the UK closer to where the goods will be consumed.
Bringing ships closer to key areas of consumption such as London, Birmingham and Manchester reduces the need to truck goods many miles inland, thereby removing unnecessary supply chain costs.
In addition, rail services from the port now call at 11 destinations across the UK, offering a highly efficient alternative to road freight.
The port’s Berth Three announcement will enable the use of an additional 400 meters of quay length with a dredged depth of 17 meters alongside.
The first phase of the London Gateway Logistics Centre was opened in 2015. The centre comprises 180,000 sq. ft. of distribution and logistics space and 25,000 sq. ft. of office space.
Based on the market demand, DP World is now planning to increase the size of the centre to 380,000 sq. ft.