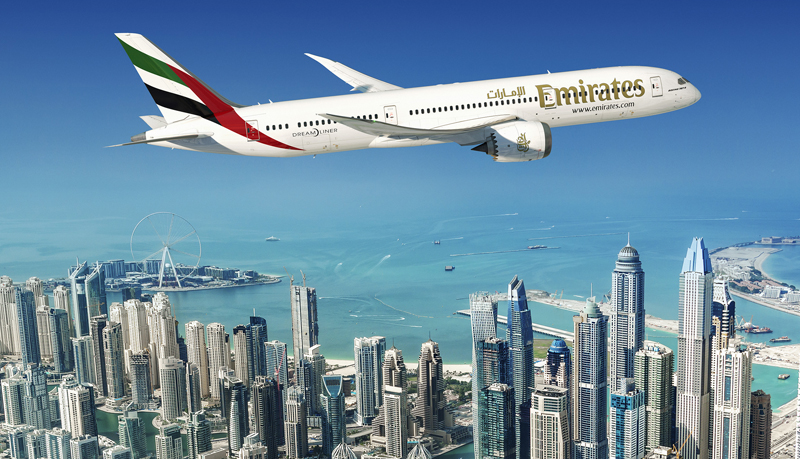 $54.5 billion deals made as the biennial event becomes a global arena for the aviation industry

The five-day Dubai Airshow 2019 yielded more than $54.5 billion in major deals and proved to be the busiest to date in its 30-year history with more than 1,288 exhibitors from 117 countries in attendance and a footfall traffic of more than 84,000.

For the first time, India, which continues to develop its aviation and aerospace industry, had its own country pavilion at the biennial event. Exhibitors from places such as the USA and Korea also made their first appearance at the show. Ukraine, Poland, Russia, France, the UK, Saudi Arabia, China and Canada were among the other countries represented.

100 new exhibitors, including Saudi Arabia’s The Helicopter Company, one of key event sponsors, also participated in this year’s show.

“We have done more than we expected, we have met and had discussions with a lot of companies and we have seen a lot of customers and shown our aircraft to many people as well, so we are very happy with what has taken place. We are a new company, so relationships matter a lot. Communication matters as well, and Dubai Airshow is one of the best communicators,” said The Helicopter Company CEO Yahya Homoud Alghoraibi who described the show as “very successful”.

Thuraya says the live screening of the demonstrative surveillance mission is a testament to its enhanced Aero mobility capabilities, designed to fulfil government customer requirements for secure mobile satellite communications across a variety of aerial platforms including helicopters, UAVs, Fixed and Rotary winged aircrafts.

For the first time in 2019, a growing focus on space exploration regionally was recognized with its own conference program, opening with Women in Space, hosted by the UAE Space Agency and featuring speakers from the UN and Boeing, among others.

Aimed at examining the key role female scientists, researchers, engineers and astronauts will play in the future of the global space industry, the conference proved a huge draw and former astronaut, the European Space Agency’s Claudie Haigneré, said she found the level of engagement very encouraging. “I felt that really something is going on here, and I’ve been really impressed because this shows a real possibility for change. The new generation coming up here is so refreshing.”

The Space Tech Talks, meanwhile, looked in-depth at the technological advancements needed for the next generation of space exploration, and the impact they are expected to have on the wider world.

Colonel Al Worden, who served as the Command Module Pilot of Apollo 15, also hosted a keynote session examining the lessons learned from the Apollo 12 moon landing.

He also spoke about his new Endeavour Scholarship, launched in collaboration with Kallman Worldwide, which will see four Emirati students and two teachers sent to space camp in the USA.

“The UAE is the first and we’re going to do that with eight different countries initially, because these young people are our future. We’re trying to motivate them into space and we want them to understand what science, technology, engineering and maths are all about,” said Col. Worden.

floor, where exhibits ranging from Dubai Police’s new flying bike for hard to reach emergencies to new products in the medivac field, through to the first commercial space flight suits from Virgin Galactic, were all on show.
Major airline deals
Emirates, the world’s largest international airline, made separate announcements on major deals it forged with Boeing and Airbus with total value of $24.8 billion.

It signed full purchase agreement for 30 Boeing 787-9 aircraft, worth US$ 8.8 billion at list prices, exercising its right to substitute the B777x with B787s.

The deal includes Boeing 787 Dreamliners, with deliveries commencing in May 2023 and continuing for the next five years. For the B777X, Emirates will enter into discussions with Boeing over the next few weeks on the status of deliveries. This takes Emirates’ total order with Boeing to 126 Boeing 777X aircraft.

“The 787s will complement our fleet mix by expanding our operational flexibility in terms of capacity, range and deployment to connect new city pairs and expand frequencies. We are also pleased to reaffirm our commitment to the Boeing 777x program and look forward to its entry into service,” said Sheikh Ahmed.

The deal will create and support some 45,000 additional jobs in the US aerospace industry applying the US Department of Commerce jobs multiplier formula that every $1 billion in US aerospace exports supports 5,200 American jobs.

“Complementing our A380s and 777s, the A350s will give us added operational flexibility in terms of capacity, range and deployment. In effect, we are strengthening our business model to provide efficient and comfortable air transport services to, and through, our Dubai hub,” said Sheikh Ahmed.

“This US$ 16 billion deal reflects our confidence in the future of the UAE’s aviation sector, and is a strong affirmation of Dubai’s strategy to be a global nexus connected to cities, communities and economies via a world-class and modern aviation sector,” he added. 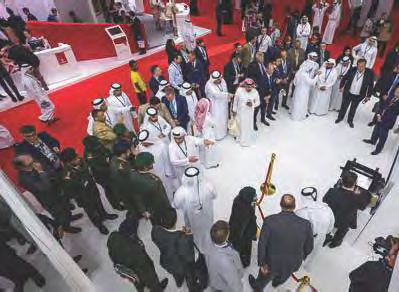 Air Arabia, the Middle East and North Africa’s first and largest low-cost carrier (LCC), also placed an order for 120 Airbus A320 family aircraft worth over $14 billion.

The new orders are for 73 A320neo, 27 A321neo and 20 A321XLR airplanes, all belonging to the A320 family but each bringing exceptional value for Air Arabia in meeting its growth goals. Delivery is scheduled to commence in 2024 and the Sharjah-based airline has yet to specify the engines to be installed on its new fleet.

“Air Arabia’s fleet growth strategy has always been driven by commercial demand and we are glad to announce today one of the region’s largest single-aisle orders with Airbus to support our growth plans. This new milestone underpins not only our solid financial fundamentals but also the strength of our multi-hub growth strategy that we have adopted over the years while remaining focused on efficiency, performance and passenger experience,” said Adel Al Ali, Group Chief Executive Officer of Air Arabia.

The UAE Ministry of Defense also made major deals for purchase and maintenance with total value of more than AED18 billion.

The two parties agreed to establish collaborative groundwork for the delivery of world-class MRO services through shared knowledge and a strong heritage in aviation excellence. Together, they bring a combined 60 years of  experience in the industry.

“Our historic agreement with EEMC presents tremendous opportunities to create value for the UAE’s growing aerospace industry and more importantly, to generate high-value job opportunities for Emirati talent. This also marks the beginning of a productive collaboration between two of the UAE’s largest homegrown aviation and aerospace companies that can turn the nation’s aspirations of a global-leading UAE-based MRO hub into reality,” said Sanad Aerotech CEO Mansoor Janahi.

Within a state-of-the-art maintenance facility at Al Warsan in Dubai, EEMC provides dedicated aircraft engine MRO services to the Emirates fleet. It currently delivers MRO capacity for GE 90, GP 7200, with a 24/7, 365 days a year service backed by a qualified and highly competent workforce that strips, inspects and builds on a single site. 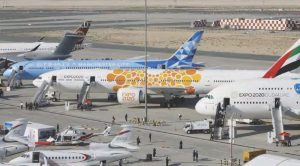 Rolls-Royce and Oman Air, meanwhile, have agreed to  a  five-year  contract  for engine  MRO  for eight Trent 700-powered Airbus A330 aircraft. The agreement will see Rolls-Royce provide Oman’s national carrier with its flagship TotalCare long-term aftercare service solution, which is designed to provide predictive maintenance planning and maximize aircraft availability.

“As a world-class organization, we place great importance on partnering with companies pioneering cutting-edge technologies. We have a long-standing relationship with Rolls-Royce, and I am delighted to extend it by selecting TotalCare for the engine servicing of our Trent 700-powered A330s,” said Abdulaziz Al Raisi, CEO Oman Air.

Air freight carriers and its supply chain also had their fair share of action as Cargo Connect returned to the Dubai Airshow for the second time.

This year, the focus was on technology innovations disrupting the cargo industry. Some of the biggest names in the industry looked at future advancements, including next generation freight, automation, eCommerce and digital cargo, while also addressing how Expo2020 will impact the UAE industry.

“There is no doubt that technological innovations can help the air cargo industry take the next big leap forward in terms of efficiency and service delivery” said Nabil Sultan, Divisional Senior Vice President, Cargo of Emirates. “Artificial Intelligence, blockchain and other disruptive technologies hold a vast potential to deliver a number  of benefits.” 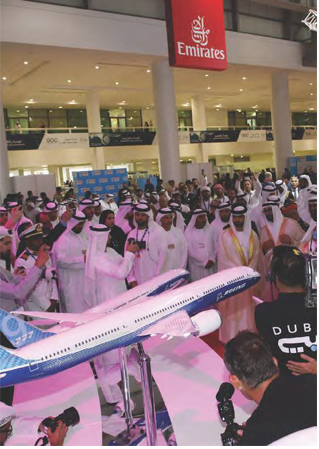 The Middle East is in a strategically advantageous position with trade and manufacturing moving eastward towards the growing middle classes of Asia and India. In addition, China is predicted to be a top three trade partner with the UAE between now and 2030.

eCommerce is one of the sectors within air freight seeing substantial growth. In the MENA region online transactions grew by 44% with the greatest growth coming from the UAE and Saudi Arabia. There has been plenty of commercial investment in this space in the Middle East: in 2017, Amazon purchased local e-commerce platform, Souq.com, investing in a 26,000 square metre fulfilment centre in Dubai ahead of its rebranding to Amazon in the UAE.

The OECD’s long-term ITF Transport Outlook 2019 predicts global freight demands will treble between 2015 and 2050 with the largest growth coming from the airfreight sector with a CAGR of 4.5%.

“As one of the fastest growing air cargo hubs in the world, Dubai will be the leader in pushing the industry forward to adopt technologies and processes which increase profitability and efficiency. Cargo Connect is the focal point for that leadership,” says Rachel Sturgess, Portfolio Director at show organizers Tarsus F&E LLC Middle East.

Commenting on the show’s culmination, Michele van Akelijen, Managing Director of show organizers Tarsus F&E LLC Middle East, said: “We always want to outperform our last show, and 2019 has gone above and beyond expectation, with so much great business being done alongside an engaging and innovative program of conferences, exhibits and flying displays.

“We have already seen exhibitors rebooking for the next edition, and we look forward greatly to seeing what the next two years of aerospace development will bring to out 2021 edition.”