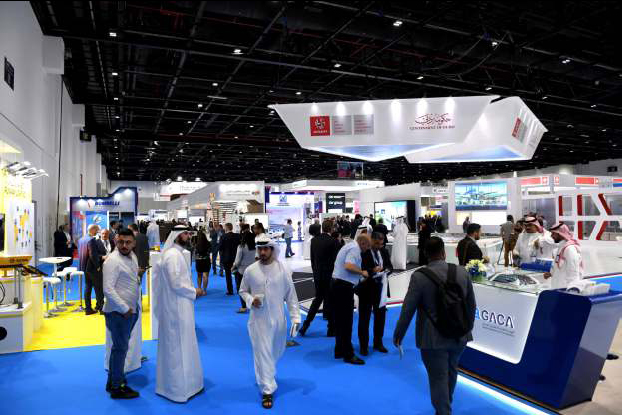 Dozens of new technologies and innovations at Dubai Airport Show 2019

Now laptops and liquids can stay in bags while being screened at airports with advanced screening system invented. AI-powered Smart Corridor now on trial in Dubai after successfully introducing Smart Gates. Unique loading system, baggage handling system with virtual reality and more will change the face and pace of airports across the world.

With speed and convenience among travelers paramount without sacriﬁcing security, airports are strongly relying on new technologies and innovations to produce new solutions for today’s modern-day travel experience.

At the recently concluded 19th edition of Dubai Airport Show, the world’s largest airport exhibition, more than 50 new technologies and innovations in the aviation industry were unveiled.

“This means passengers need not take out their laptops and bottles with liquids while screening at the airports,” said Tom Squier, Smiths Detections Managing Director for Middle East.

The company also showcased the next-generation portable desktop system, the Ionscan 600, to detect and identify trace amounts of explosives.

ADP Ingénierie, which is known for designing greenﬁeld airports and maintenance, unveiled a Baggage Handling System (BHS) using virtual reality which gives airport operators virtual view of the end results of what they are designing.

This year, 20 companies participated under the Swiss ﬂag, showcasing cutting edge technologies. Chris Watts, Consul General of Switzerland, said Swiss companies have contributed to the
development of the region.

One of them, EuroPoles, unveiled a unique loading system, and signed a deal with Dubai Airports for the calling points systems and energy saving systems. 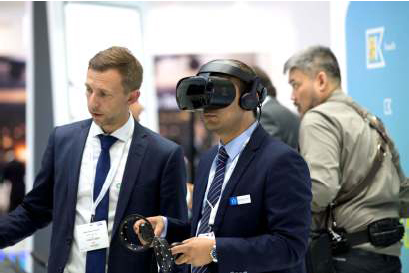 “As ATC infrastructure forms a critical foundation for the aviation industry, one of the most important aspects is to ensure the support of legacy applications and services while moving toward an IP environment. Nokia has helped many ANSPs overcome these legacy application support issues with robust network solutions allowing seamless connectivity and reduced costs,” said Kamal Ballout, head of the TEPS MEA & Global Energy Segment,
Nokia.

DFS Aviation Services showcased the PHOENIX Web Innovation System. This web-based cloud solution enables air traﬃc controllers to use PHOENIX tracker not only at their controller working position but also anytime and anywhere. The product targets ANSP’s, airports and airlines as well as any other stakeholder involved in ATM.

“We believe that airports will have to tackle positive challenges like growth and expansion. We look forward to strengthening DFS Aviation Services in the UAE and Middle East market as a competent and reliable partner for ATM and consultancy, ” said Oliver P Cristinetti, General Manager, DFS Aviation Services.
Saudi Ground Handling Services ( S G S ) said it’s studying some projects outside Saudi Arabia, with diﬀerent partners from these countries.

“With Vision 2020 and Vision 2030, we have lots of changes in the government to open up the tourism industry to make it attractive for foreigners. There are big expansion plans at the airports,” said Abdullah Marie Al Ghamdi, Director, Commercial, Saudi Ground Handling Services. “We are implementing a new system, InForm system, which will link manpower, rostering and equipment. It is an IT solution linking planning, equipment, manpower which will give real- time of equipment needed. This we are implementing in Jeddah and later will be used in other airports.” Ground Handling Logistics of Saudi Arabia showcased their PRM ( Passenger swith Restricted Mobility) technology. PRM products and equipment give special care for people with special needs.

“We try to provide all equipment and system to make all the airports accessible for passengers with special needs,” said Yasser Kusibati, Chief Business Development, with Ground Handling Logistics. 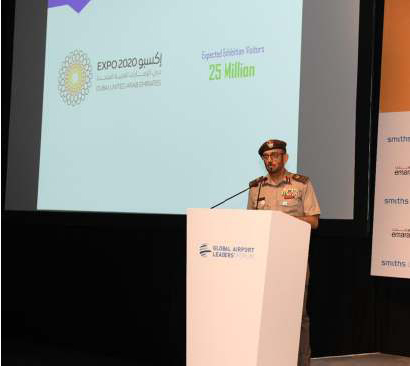 Major General Mohammed Ahmed Al Marri, Director General of General Directorate of Residency and Foreigners Aﬀairs (GDRFA- Dubai ) , said the number of passengers who used the Smart Gates at the airport increased from 5.5 million in 2017 to 11.25 million in 2018.

He said a number of technology- driven initiatives have been in place to facilitate the faster movement of passengers for completion of border control formalities at two international airports – Dubai International and Al Maktoum International – in the run-up to and during the Expo 2020 which will bring 25 million visitors to Dubai when it hosts the ﬁrst Expo in the Middle East, North Africa and South
Asia (MENASA).

Another Seamless Passenger Experience product is Smart Corridor which enables passenger to enter the corridor in a sequence and their Iris will be captured on the ﬂy without the need to present any travel document or stand in queue for Iris capture.

Smart Corridor is currently under operational experiment at Terminal 3 Departure. Because of Artiﬁcial Intelligence (AI) capabilities and Iris recognition biometrics, oﬃcials are allowed recognition while the passengers are moving, wearing sunglasses or contact lens, and even running – accurately and quickly.
Another government organization which has been fast deploying smart technology in its operations is Dubai
Customs.

Dr. Hussain Al Fardan, Head of Innovations Centre at Dubai Customs and Chairman of Ideas Arabia, said Artiﬁcial Intelligence have been playing a crucial role in the drive towards making airport security better and better each passing day. More than 114 world-class innovations have been made so far by Dubai Customs, one of the earliest government departments in the emirate dating back to more than 100 years.

He explained the various initiatives of Dubai Customs including the world’s ﬁrst customs female inspection robot, an Android-based facility which it launched in 2015 at Dubai International T3.

Harald Jentsch, Head of Baggage Handling Solutions at Smith s Detection, a global technology company with presence in 50 countries, said when using the AI, the detection rate had been found higher than 90 percent and also equal or even better than the human capability.
He said the majority of European and Middle East airports were currently in the process of implementing Europe an Civil Aviation Conference ( E C A C ) Standard 3-approved Explosives Detection Systems (EDS). The new standard is being implemented to detect higher levels of threats, while lowering operational false alarm
rates (FAR).

The European Commission passed a legislative framework requiring all hold baggage screening (HBS) in Europe be equipped with ECAC Standard 3-approved EDSin the Europe by 2020 and 2022 in speciﬁc
circumstances.

Upgrading from Standard 2 to Standard 3 – approved systems requires redesigning and reconﬁguring the Baggage Handling Systems (BHS). In many Standard 2 conﬁgurations, the ﬁrst level of screening is handled by a standard X-ray system, while a more powerful, Computed Tomography ( C T ) technology is used at Level 3. With the new mandate, Standard 3- approved machines will now be used right at Level 1.

Dubai Airport Show 2019 drew 375 exhibitors from 60 countries with record participation of 211 Hosted Buyers from 30 countries, up from last year’s 180.

Next year’s edition will be bigger by 1,000 sqm exhibition space which has been added to this edition’s 15,000 sqm. Three new co-located events have been added for the next year edition: Ground Handling, GSE
and Air Cargo.

Global Airport Leaders Forum (GALF), Aviation Security and Air Traﬃc Control (ATC) Forum will continue its journey of success in the 2020 edition. Reed Exhibitions Middle East, the organizers of Airport Show, said this year’s much- anticipated show was a stupendous success taking into account diﬀerent parameters, including the increased number of deals & strategic alliances signed between the participating companies and hosted buyers.