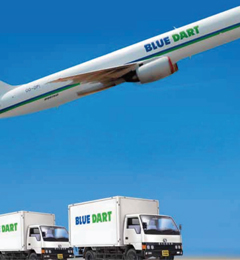 Courier, express and parcel (CEP) companies have never had
it so good in India. The factors driving healthy growth of CEP
companies are many – general surge in economic development
in India; improved logistics operations; enhanced connectivity
(road, rail and air); technological strides; and e-commerce. The
growth story is likely to continue in the years to come as there is
considerable movement of people and goods between metros,
Tier II and III cities.

The growth story of CEP can be looked at from different angles.
The parcels delivered by the CEP service providers are nonpalletized
items and are seldom over 50 kg in weight. While they
are delivered either by rail or road, it is the Express segment
which generally gets moved by air, considering that it is prompt,
fast and time-bound delivery. E-commerce players are using the
Express service more often than not as time is of essence.
Impressive domestic services

As there is movement of CEP within the country and outside the
country, the players range from the very local, regional, national
to international. The biggies in the CEP segment have been UPS,
FedEx from USA; and DHL, TNT from Europe. In India, leading
the business is Blue Dart and players such as Gati, DTDC etc. The
country-specific players are now witnessing exponential growth,
driven by the surge in e-commerce activity and this is likely to
continue for many more years.

With e-commerce going aggressive the share of B2C component
in a CEP company has increased, eating into B2B. It has brought
into focus how these companies have started route planning
and resource planning to cater to more deliveries per day and
covering a vast geographical spread. According to Goldman
Sachs India’s e-commerce market would touch $100 billion by
2020 and this indeed is encouraging news to the CEP industry
and many new companies have surfaced in the recent past and
they include Ecom Express, Delhivery, Gojavas etc.

Anil Khanna, Managing Director, Blue Dart Express Limited
said, “While the economy continues to face several challenges,Blue Dart has continued to be resilient and has displayed
exemplary quality and service excellence by incorporating high
benchmarks and quality standards in every aspect of business.
Blue Dart has steered through successfully with a clear focus on
fundamentals like quality, consistency, reliability, passion and
commitment. We are committed to serve Blue Dart country and
sustain our leadership position in the air and ground express
segments through the widest range of innovative products
and services, dedicated air and ground infrastructure, superior
technology and passionate people force”.

He further added, “Blue Dart continues to be one of the most
admired and awarded companies in India. Blue Dart recently
featured in the list of India’s Super 50 Companies by Forbes India,
ranked in the BW Real 500 as one of the 500 biggest non-financial
companies in India by Businessworld and KPMG and was awarded
the Best Express Service Provider of the Year – Domestic at the 9th
Express, Logistics and Supply Chain Conclave 2015”.

Delivery to nearly 35,000 locations in India

It recently launched the country’s first Parcel Locker at
Gurgaon’s Unitech, Cyber Park. With the Indian e-tailing
industry expected to grow at 52 per cent from 2014 to 2020,
the sector has been witnessing phenomenal demand from
across India. Parcel Locker allows recipients of parcels to
collect their shipments from the facility 24-hours a day. This
mechanism will benefit e-tail customers who may not be
present during regular delivery hours, and can collect their shipments from the Parcel Locker at any time as per their
convenience. The service will also be beneficial for those who
travel often, especially with the festive season around the
corner. While e-tailing offers customers the opportunity to
shop around the
Blue Dart has state of the art technology for tracking and tracing,
MIS, ERP, customer service, space control and reservations.
Importantly, it has its own aircraft, five freighters in all, under
its wing Blue Dart Aviation. The freighter unit has dedicated
capacity to support time-definite morning deliveries through
night freighter flight operations.

Blue Dart has warehouses at 79 locations across the country as well
as bonded warehouses at the seven major metros of Ahmedabad,
Bengaluru, Chennai, Delhi, Mumbai, Kolkata and Hyderabad.

Anil Khanna said, “The macroeconomic situation in the last 2-3
years has not been encouraging to support growth. Despite
an adverse external situation and challenges, the company
has been able to deliver a reasonable performance, aided by
our clear focus on the e-commerce vertical although the core
verticals have not shown much traction.”

It is the only CEP company to have its own dedicated freighters.
Blue Dart Aviation operates five freighters (Boeing 757)
supported by sophisticated security systems and x-ray machines.
The airline meets the intensive maintenance rigours and has a
‘lean and mean’ maintenance team that can conduct up to ‘D’
level check. It is equipped with a structure repair shop, wheel
and brake shop, avionics and radio labs with highly qualified
technicians and engineers.

Blue Dart has positioned itself as the preferred, seamless
link to a country projected to be an economic superpower
of the 21st Century.