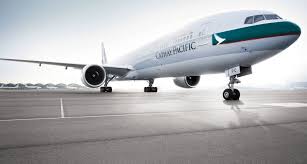 Brisbane Airport has welcomed its first Airbus A350 operator with Cathay Pacific introducing the type on its nonstop service from Hong Kong recently.

Cathay Pacific’s CX157, operated by B-LRA, touched down at Brisbane Airport a little after 2230 local time after an eight and a half hour journey from Hong Kong.

The A350-900, which features 280 seats spread across 38 in business, 28 in premium economy and 214 in economy, was on the ground for about 80 minutes before taking off as the reciprocal CX156 bound for Hong Kong.

It replaces the Airbus A330-300, which has 29 fewer seats and less cargo capacity, on the daily service.

The A350-900 will be an increasing part of Cathay’s Australian network, with the Hong Kong-based airline already using the aircraft to Melbourne since February. Cathay is also scheduled to upgauge its daily flight to Perth from the A330 to the A350 from October.

Cathay Pacific’s Airbus A350-900s have a distinctive six-way headrest in economy. (Lance Broad)
B-LRA on the ground at Brisbane Airport. (Lance Broad)
Like Brisbane, Cathay will be the first A350-900 operator at Perth.

The use of larger aircraft follows a similar move in Sydney where two of Cathay’s four daily flights are now operated with 777-300ERs, with a third to be upgauged to the big Boeing twin from October.

Cathay has utilised all available traffic rights for Hong Kong carriers to Australia’s four major international gateways of Brisbane, Melbourne, Perth and Sydney, which currently sits at 70 flights a week. As a result, the only way to add capacity is to upgauge to larger equipment.