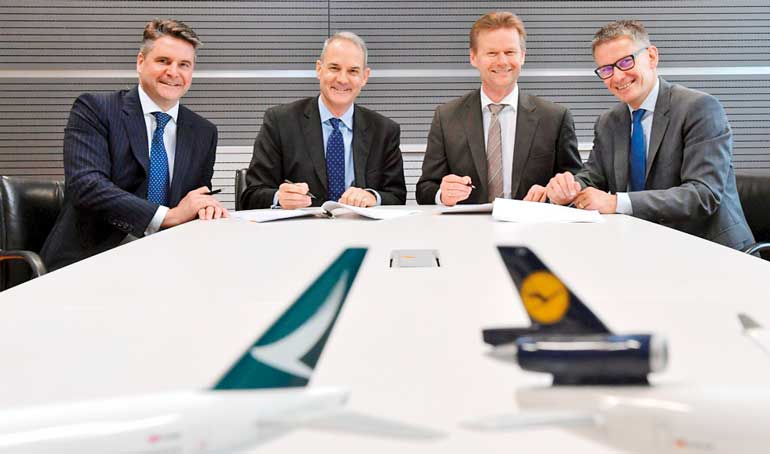 Cathay Pacific/Lufthansa Cargo joint network will cover 140 direct flights per week between Hong Kong and Europe.
Cathay Pacific and Lufthansa Cargo have signed an agreement for a ‘highly integrated bilateral cooperation,’ a statement from the companies said.

Some of the benefits customers will enjoy thanks to the cooperation include more direct connections, greater flexibility and time savings, the airlines said.

On routes between Hong Kong and Europe, both airlines will work together on network planning, as well as sales, IT and ground-handling. “This will bring Hong Kong, the world’s busiest air cargo hub, closer to Europe, strengthening one of the world’s great trade lanes,” the companies contend.

“Our joint network will cover more than 140 direct flights per week between Hong Kong and 13 European destinations”, says Simon Large, Director for cargo at Cathay Pacific. “Cathay Pacific’s large number of direct connections to multiple European destinations complements Lufthansa’s strength in Frankfurt, the most important European air freight hub, and in Europe through its dense feeder-network.”

“As a result of our joining forces, customers will gain access to unique flexibility with more flights to choose from and a combination of feeder and direct flights. In this way their cargo can reach its destination hours earlier,” explained Lufthansa Cargo CEO Peter Gerber. “We will also have more options for shipments which have to be transported by freighter due to their size or properties.”

The cooperation will also focus on service enhancements. Customers will be able to access the entire joint network via the booking systems of both partners. Joint handling, initially at the Hong Kong and Frankfurt hubs, will also make things easier for customers since there will be just one point for export drop off and import delivery.

Both partners plan to transport the first shipments under the framework of the cooperation beginning early next year, initially from Hong Kong to Europe. The ability to book eastbound shipments from Europe to Hong Kong will follow later in 2017.