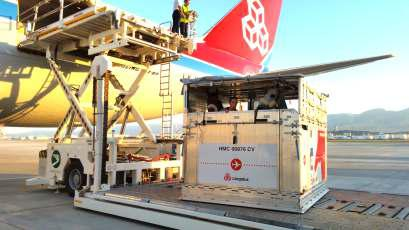 LUXEMBOURG: Cargolux Airlines International S.A. has safely flown a shipment of high-value horses from Luxembourg to Ashgabat, Turkmenistan in mid-September for the Equestrian Jumping competition at the 2017 Asian Indoor and Martial Arts Games.

Working in cooperation with Peden Bloodstock, a charterer specialized in horse transportation, the horses were also safety flown back to Luxembourg after the competition.

The games, which were awarded to Ashgabat by the Olympic Council of Asia in 2010, involved 6,000 athletes and officials from 65 teams. Equestrian Jumping was introduced as an Olympic sport at the Paris 1900 Games.

Relying on the proven support of its handling agent, LuxairCARGO, the experienced Cargolux team used its state-of-the-art HMC horse stalls that offer increased safety and comfort for its four-legged VIPs.

The HMC not only provides higher stability but its double layer pallet base also reduces the motion feeling for the horses, greatly reducing the stress the animals feel compared to single layer pallets.

Cargolux, a member of the Animal Transport Association (ATA) is a major industry player in the transportation o f horses by air. The airline’ s dedicated team of experts regards each animal as a special responsibility that has to be treated with utmost care.