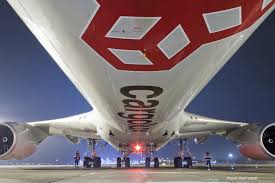 Cargolux has added a third weekly frequency to its Ho Chi Minh operation in response to growing demand from the country.

The extra frequency started recently, with the outbound flight routed via Doha and the return leg via Singapore and Luxembourg.

The airline said it had served the city since 2007 in response to the growth of local industries with shipments of general cargo, consumer goods and spare parts.

Export commodities include garments, footwear, handicraft and electronics, as well as seafood products and other perishables.

“With its expanded service to Ho Chi Minh City, Cargolux once more underlines the commercial importance of Vietnam and acknowledges the growing demand for air cargo capacity in an increasingly important market that is rapidly ramping up its trade and manufacturing industries,” the Luxembourg-based airline said.