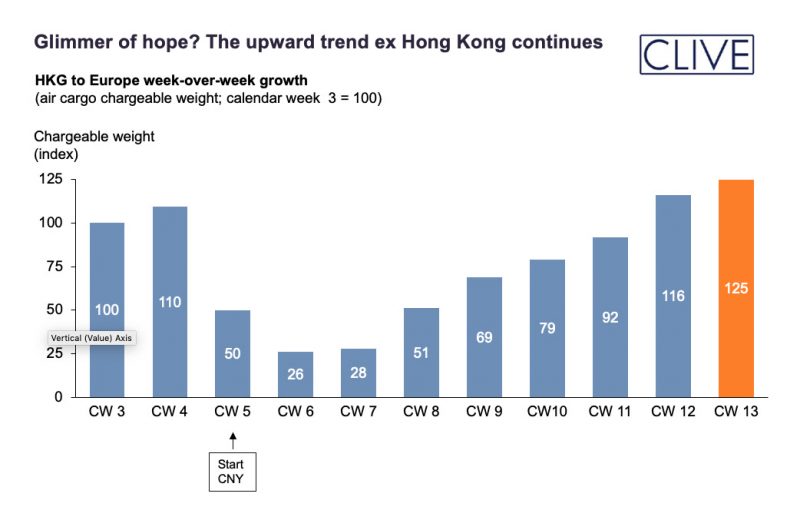 Cargo volumes down by 23% in March

Covid-19 ‘raised its ugly head’ faster and faster in the air cargo industry in March as global cargo volumes fell by 23% versus the same four weeks of 2019.

The decline in demand accelerated week-on-week throughout March, with the week ending 29 March showing volumes were just half of what was moved in the same seven days of last year, according to the latest air cargo market intelligence from CLIVE Data Services.

The ‘dynamic load factor’ for the four-week period of 68% – based on both the volume and weight perspectives of cargo flown and capacity available – represented a decrease of 1.5% points versus 2019 but an increase of 3% points versus February.

“Sadly, there is no getting away from the overall concerning developments we are seeing in the global air cargo market, but there is perhaps a little bit of hope to be found in Asia – which was hit first by the outbreak of COVID-19. In previous data, we reported the step-by-step improvement on the Hong Kong to Europe market and this is continuing. The reported volumes for the last week of March 2020 were 26% higher than before the Chinese New Year started. If this is sustained, it will at least offer some hope for the rest of the industry of the speed with which air cargo traffic can recover after a very difficult time,” said CLIVE’s Managing Director, Niall van de Wouw.

CLIVE’s first-to-market analyses consolidates data shared by a representative group of international airlines operating to all corners of the globe. Based on both the volume and weight perspectives of the cargo flown and capacity available, it gives the air cargo industry the earliest possible barometer of market performance each month.