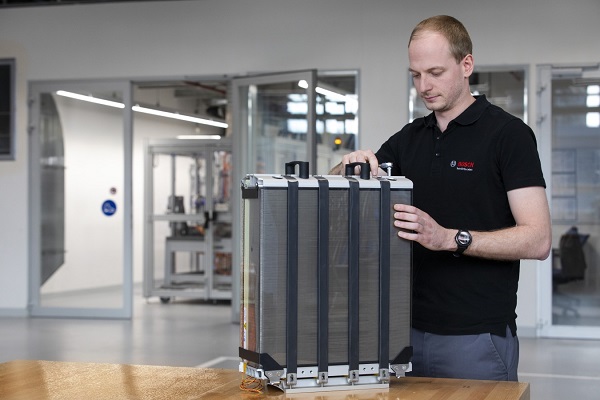 Bosch is entering the market for mobile fuel cells and paving the way for the breakthrough of this technology in trucks and cars.

One crucial component is the stack. As the core of the fuel cell, it converts hydrogen into electrical energy and Bosch has formed an alliance with Powercell Sweden AB to further improve and manufacture these stacks.

Under the agreement, the two companies will work jointly to make the polymer-electrolyte membrane (PEM) fuel cell ready for production.

Bosch will then manufacture this technology under license for the global automotive market. The stack will complement the Bosch portfolio of fuel-cell components, and is to be launched in 2022 at the latest.

As much as 20 percent of all electric vehicles worldwide will be powered by fuel cells by 2030, according to research by Bosch.

“In the fuel-cell domain, Bosch already has a strong hand, and the alliance with Powercell makes it even stronger,” says Dr. Stefan Hartung, member of the Bosch board of management and chairman of the Mobility Solutions business sector. “Commercialising technology is one of our strengths. We are now going to take on this task with determination and develop this market.”

Once they have become established in trucks, Bosch fuel-cell powertrains will then increasingly find their way into passenger cars. But for this to happen, the cost of fuel-cell systems needs to be progressively reduced.

The biggest cost item is the stack. It accounts for nearly two-thirds of the total cost of a fuel-cell system. “Through commercialization and widespread marketing of this technology, Bosch will achieve economies of scale and push down costs,” Hartung says.

In the fuel cell (or fuel-cell stack as an assembly of such cells is called) the hydrogen reacts with oxygen. The end result – apart from water as a by-product – is electrical energy.

This can be used either to recharge a battery in the vehicle or to directly power the electric motor. By flexibly combining two or more stacks, the power requirements of all kinds of vehicles can be covered, from passenger cars to heavy trucks.

Bosch has been working with the British specialist Ceres Power to further improve solid-oxide fuel cells (SOFC) technology for applications such as distributed power supplies to factories and computing centres. The idea behind the technology is to have small power stations set up throughout cities, as well as in industrial areas.

Because these standardized plants are highly flexible, they will be able to cover peak demand better than conventional plants. The aim is for one SOFC module to generate 10 kilowatts of electrical power. Where more electricity is needed, any number of modules with the same output can simply be interconnected.