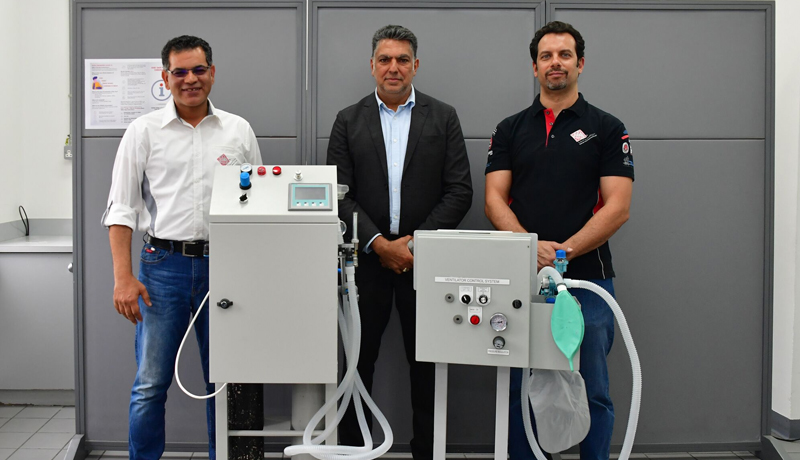 MANAMA: Bahrain’s legendary F1 circuit will produce hundreds of ventilators for COVID-19 patients – and vowed to share the blueprints free of charge worldwide.

Engineers from the track, which hosts the Grand Prix championship race each year, designed the breathing apparatus in just two weeks for non-ICU patients in need of respiratory assistance.

The device was then built from scratch in partnership with intensive care doctors from Salmaniya Medical Complex’s Respiratory Therapy Department and Medical Equipment Department.

Now an order has been placed for the first 100 machines following extensive testing and approval by Bahrain’s Ministry of Health.

Bahrain International Circuit says it is sharing the blueprints free of charge to organizations around the world amid global efforts to increase ventilator capacity.

Initially, two different machines were designed and both have been approved – the first by design team lead and BIC mechanical engineer Kamel Al-Taan and the other by Tareq AlTajer.

“At a time of global crisis, we have been seeking ways in which the BIC can support the fight against COVID-19,” said Fayez Ramzy Fayez, Chief Operating Officer at Bahrain International Circuit. “Our engineers have met that challenge by designing a ventilator system specifically to support those suffering from COVID-19. As this is a global effort, we are happy to make these designs available to other organizations around the world who are seeking to find similar solutions.”

Bahrain International Circuit has hosted the annual Formula One Championship since 2004, but this year the race was postponed as a precautionary measure.

Instead, a virtual Grand Prix was held featuring celebrities and F1 drivers including Lando Norris and One Direction star Liam Payne. The eventual winner was Formula 2 racer Guanyou Zhou who soared into the lead from third on the grid, finishing a full 11.392s over ex-McLaren driver Stoffel Vandoorne.

SILICON VALLEY: Tech giants Apple & Google announced they are teaming up to create a Covid-19 tracking tool using Bluetooth technology which people can download on their smartphones.

The app, scheduled to be launched this May, is designed to help in contract tracing of people suspected to be infected with the Coronavirus. Worldwide, more than 3 million cases were confirmed and over 200,000 have died due to the virus.

The tech giants said their joint effort will help governments and health agencies reduce the spread of the virus, with user privacy and security central to the design.

“Since COVID-19 can be transmitted through close proximity to affected individuals, public health officials have identified contact tracing as a valuable tool to help contain its spread. A number of leading public health authorities, universities, and NGOs around the world have been doing important work to develop opt-in contact tracing technology,” the tech firms said.

Apple and Google said a comprehensive solution that includes application programming interfaces (APIs) and operating system-level technology to assist in enabling contact tracing will be launched in two steps.

This month, both companies will release APIs that will enable interoperability between Android and iOS devices using apps from public health authorities. These official apps will be available for users to download via their respective app stores.

In the coming months, Apple and Google said they will work to enable a broader Bluetooth-based contact tracing platform by building this functionality into the underlying platforms, a more robust solution than an API and will allow more individuals to participate.

“All of us at Apple and Google believe there has never been a more important moment to work together to solve one of the world’s most pressing problems. Through close cooperation and collaboration with developers, governments and public health providers, we hope to harness the power of technology to help countries around the world slow the spread of COVID-19 and accelerate the return of everyday life,” the tech giants said in a joint press statement.