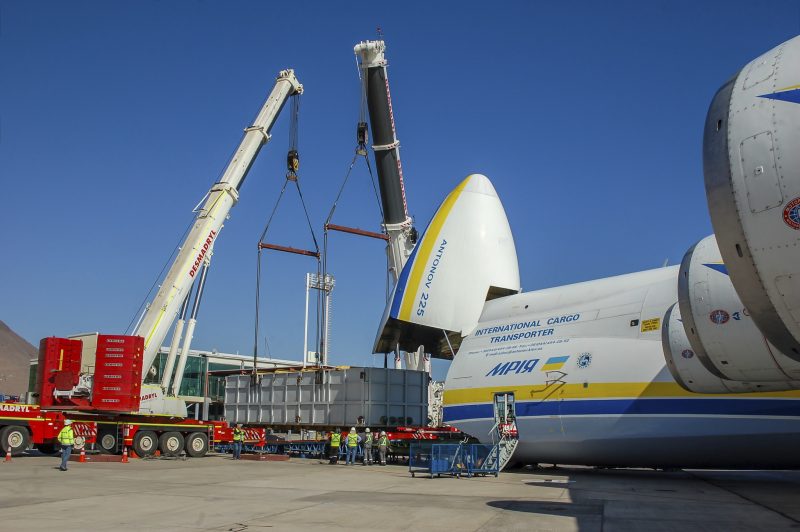 ANTONOV Airlines has successfully completed the 12th in the longest succession of AN-225 flights in the aircraft’s commercial operating history.

“The initial configuration of the cargo did not allow its loading on the aircraft, and as a result the lifting points were reworked,” said Andriy Blagovisniy, Commercial Director, ANTONOV Airlines.

“The amended design, which featured bolted joints, allowed us to remove the lifting points from the cargoes when they were installed on the loading ramp, which in turn reduced the cargoes’ height.

“Upon arriving at the destination, we pulled the cargoes out to the loading ramp, and the specialists on-site reinstalled the lifting points on their initial positions, tying them with bolts for subsequent lifting and offloading using external cranes.

“A special low-profile loading system designed by ANTONOV Company specialists was used to handle the large height of the cargo.”

The weight distribution of the single-piece cargo on the aircraft floor initially exceeded maximum permitted values for the AN-225, the world’s largest aircraft.

“Special damping panels and reverse bend technology were introduced to tackle the weight distribution of the cargo,” added Blagovisniy.

“Our flight crew received special training that took into account the design features of the cargo, to meet the maximum permitted g-forces during takeoff, in flight, and landing.”

ANTONOV Airlines secured the cargo inside the aircraft with a special lashing pattern, developed specifically for the project that allowed for welding of a calculated number of lashing points and special winching points for the cables of the aircraft winches.

“As Chimore Airport does not have provisions for night time operations and flights, the entire process, including the unloading of the cargo and the departure of the aircraft, had to be completed strictly during daylight hours,” said Blagovisniy.

Additional equipment for aircraft servicing and cargo unloading, including a ground power unit and a forklift, had to be delivered in Chimore, Bolivia.

ANTONOV Airlines transported its own towing tractor from Gostomel Airport in Kyiv, Ukraine to Chile to ensure suitable aircraft towing throughout the twelve flights as there was no tractor with the required power available at Iquique Airport.

“This project saw the highest level of expertise and coordination between personnel of all partners participating in the AN-225 operation and unloading of the aircraft, allowing flights to keep to our tight schedules,” said Blagovisniy.

“All parties involved in this multinational project have gained invaluable experience in providing logistics solutions using the AN-225, laying the groundwork for fruitful cooperation in the future.”