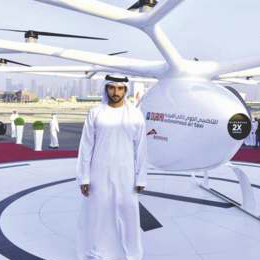 Another world first from Dubai: Volocopter, the flying taxi

DUBAI: The futuristic city of Dubai had successfully tested in September the prototype of the world’s first self-flying taxi built in Germany.
H.H. Sheikh Hamdan bin Mohammed bin Rashid Al Maktoum, Crown Prince of Dubai, witnessed the launch of the Autonomous Air Taxi (AAT) which will be introduced by Dubai’s Road and Transport Authority (RTA).
Sheikh Hamdan, a licensed pilot, took time to sit on the two-seater AAT built by Volocopter, a Germany-based specialist manufacturer of autonomous air vehicles.
“After the remarkable success of the first driverless metro in the region, we are glad to witness the test flight of the Autonomous Air Taxi today,” said Sheikh Hamdan. “This is another testament of our commitment to driving positive change. We are constantly exploring opportunities to serve the community, and advance the prosperity and happiness of the society.”
“Encouraging innovation and adopting the latest technologies contribute not only to the country’s development but also help build bridges to the future,” he added.
Sheikh Hamdan, who also spearheaded the launch of Dubai font, the first font named after a city created in both Arabic and English in collaboration with Microsoft, said adopting innovative technologies and applications that would enhance services for the community is the key to staying globally competitive.
H.H. Sheikh Ahmed bin Saeed Al Maktoum, Chairman of Dubai Civil Aviation Authority and Chairman of Emirates Group; Mohammad bin Abdullah Al Gergawi, UAE Minister of Cabinet Affairs and the Future; and Sultan bin Saeed Al Mansouri, Minister of Economy and Chairman of the General Civil Aviation Authority, also attended the test flight.
Powered by clean electricity with low noise levels, the AAT is an environment-friendly vehicle.
Its current prototype version has a maximum flight time of approximately 30 minutes at a cruise speed of 50km/h, and a maximum airspeed of 100km/h.
The AAT is about two meters high, and the diameter of the rotor rim, including propellers, is just over seven meters.
The AAT service will be made available to the public soon through a smart mobility app.
The app will allow customers to book flights, receive booking reference details and track the route of the AAT.
Over the next five years, RTA will collaborate with the UAE General Civil Aviation Authority and the Dubai Civil Aviation Authority to put in place the operational requirements for implementing the AAT services.