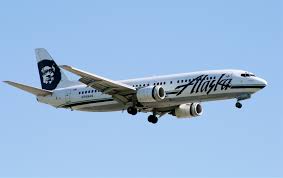 The airplanes currently sport a purely black-and-white livery with ‘Alaska’ written in a font designed to resemble icicles and a portrait of an Eskimo elder on the tail.

The new look retains the iconic Eskimo, but now the jet’s tail is swathed in color, a dark blue edged with lighter blues and green. The lighter colors also trace the fur lining of the Eskimo’s parka.

The new look, revealed to a crowd of about 2,000 employees at the Alaska Airlines hangar at Sea-Tac International Airport, will be applied also to the airline’s website, airport gates, mobile app and credit cards. Passengers arriving for Alaska flights Tuesday morning at Sea-Tac will see updated signage at the gates.

The brand refresh project was led by Sangita Woerner, Alaska’s Marketing VP, who joined the airline a year ago after heading up a coffee-brand management at Starbucks.

In a statement, Woerner said the airline is updating its brand “so it shows up bolder wherever we go.”

The changes are timed to follow recent upgrades to Alaska’s service, including free entertainment, better-quality meals and power outlets at all passenger seats.