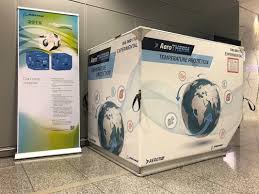 The ecoDemonstrator program showcases Boeing’s latest innovations, and the 777 flew to Germany where it was greeted by over 1,000 people keen to explore the latest aviation technologies.

The AeroTHERM Extra Cool Temperature Protective Container was provided for testing and recording temperature and performance.

Romar Frazier of BCA Advanced Concepts says: “Sustainability is fundamental to the ecoDemonstrator programme. We collaborate with partners such as Aerotuf to test technologies under real-life conditions in the air to accelerate innovation for the future of aviation.”

Adam Barrington-Spencer, vice president sales and marketing of Aerotuf says: “Today a third of the world’s food produced goes to waste, with 40% directly lost through the air cargo supply chain. This new Extra Cool AeroTHERM container will help to reduce that waste, whilst improving handling times and saving on materials cost.”