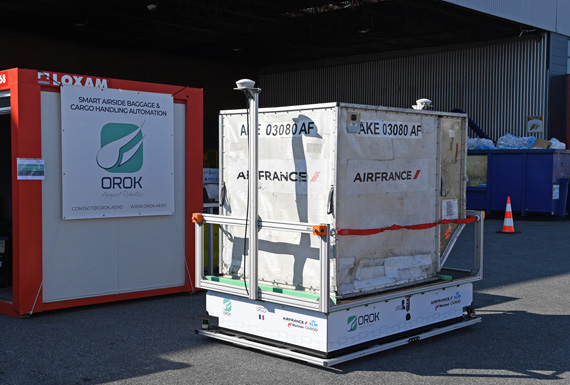 The autonomous vehicle from French startup OROK is equipped with a GPS system, artificial intelligence and numerous sensors enabling it to access loading and unloading areas close to the aircraft.

They can carry pallets loaded with goods and ULDs and are intended to replace tractors and trailers usually used between cargo warehouses and aircraft parking stands.

The test consist, initially, in transporting empty aircraft containers between two areas inside the warehouse using a first demokart prototype vehicle. The tests will, then gradually, evolve with using of a new generati more efficient vehicles, the airline group said.

The airline group said it hopes the technology will optimize, secure and decarbonize ground operations, and also decrease the number of accidents on the runway, provide faster delivery for goods or luggage and reduce surface requirements for maneuvering.

Christophe Boucher, executive vice president of Air France Cargo, said: “Air France continues to work on innovative viable projects enabling the company to improve the efficiency and reliability of its operations, as well as reducing its carbon footprint.

“Since summer 2021, the cargo teams have been pleased to welcome the start-up OROK at the G1XL freight station. This start-up is testing the transport of pallets and containers using autonomous vehicles. This joint collaboration with Groupe ADP illustrates our collective ambition to support promising projects for reducing the carbon footprint of our ground activities.”