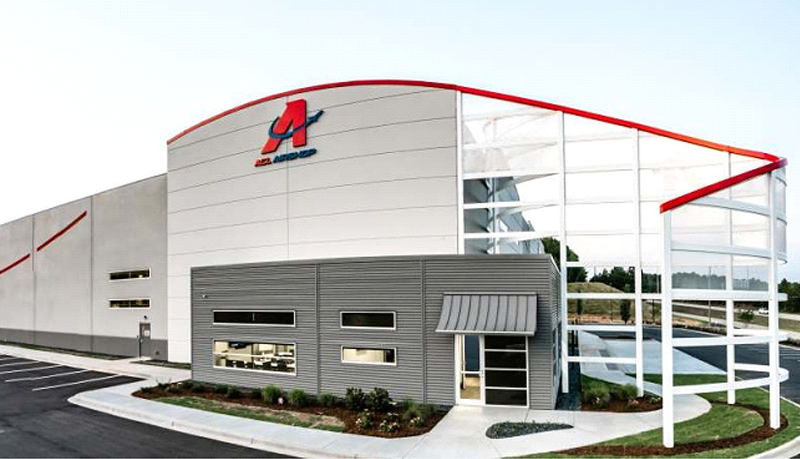 In 1979, a little known company in Greenville, South Carolina started shipping horses by air.
By 1984, it invented the short-term leasing business for airline containers, opening up its ﬁrst shop of unit load devices (ULDs)—the ACL Airshop.

Today, ACL Air shop is one of the world’s leading providers of comprehensive ULD and cargo control solutions for the aviation industry with oﬃces in more than 50 locations on 6 continents.

Its global footprint is undeniably massive with products and services used by more than 200 international airlines and at majority of the top 100 air cargo hub airports worldwide.

Air Cargo Update speaks to Steve Townes, Chairman & CEO of ACL Airshop, and CEO/Founder of Ranger
Aerospace, a private equity consolidator and management holding ﬁrm specializing in mergers and acquisitions on aerospaceand aviation with hundreds of millions in various buyouts and consolidations and investing transactions
since 1997.

Ranger Aerospace acquired ACL Airshop in February 2016 and since then the company had seen dramatic transformation in terms of sales, services and product oﬀers.

Townes, a former American Army ranger who studied engineering at United States Military Academy at West Point turned serial entrepreneur and philanthropist, said growing ACL Airshop’s network has always been their goal.
“This was our strategy following the acquisition by Ranger Aerospace and its large capital partners. The strategic mantra of “GROW THE NETWORK” carries with it hundreds of sub-tasks, but that over-arching goal has been clear from the start,” Townes shared.

We currently offer ULDs that are enabled with Bluetooth Low Energy tracking technology. This technology can provide our customers with various data points: temperature, location services, connectivity with airway bills that allow forward facing updates to the cargo customer. In addition, we are the launch customer for VRR’s new collapsible main deck container – a true game changer in terms of U LD imbalances and repositioning.

its large capital partners. The strategic mantra of “GROW THE NETWORK” carries with it hundreds of sub-tasks, but that over-arching goal has been clear from the start,” Townes shared.

“At the beginning of the “Ranger Chapter,” we interviewed customers about the value proposition of ACL Airshop. The voice of customer comments was uniformly positive, and they all said, “We hope you will provide ULD services in more hub airports.” So that was the genesis of “Grow the Network.” Our customers wrote our strategy,” he pointed out.

Wo r l d wide , ACL has 220 employees, 30 percent more before Ranger Aerospace took over, and its likely to increase with the company’s planned global expansion.

“We currently have 220 full-time employees around the world, which is roughly one-third larger than when Ranger acquired ACL Airshop in February 2016. We have added manufacturing capacity, more repair stations , and new tech nology services, resulting in a number of highly skilled professionals and technicians added to the ranks,” Townes said.

“Our overhead staﬃng has been kept to a slow-growth strategy, as we leverage the experienced executive teams across a larger base. The company is very ﬂat and thin, without redundant layers of cost which customers typically do not value,” he explained, adding, their staﬀ will likely increase to about 300 as the company pursues its goal of expanding to at least 75 of the world’s Top 100 airports in the next few years.

ACL Workshop’s staﬀ may be lean but they are well compensated and highly valued resulting to the company being voted as among the “Top Workplace” to work in the United States.

“We are proud that we were voted a ‘Top Workplace’ for a company of our type and size by that nationwide survey. It is conducted by experts from outside the company, through “blind” surveys and interviews directly with employees , completely objective. Thus, it is wonderful feedback to be rated so highly by our own people, in comparison to othercompanies in the aviation sector,” said Townes.

Transporting horses via air since 1979 or 40 years ago, ACL Airshop has long made its mark in carrying live animals safely and securely through specialized ULD solutions with accompanying highly – trained professionals.

It has well – trained grooms , educated equine veterinarians ensuring that each horse receives unique care and custom placement depending on gender and size. Its solutions include collapsible stalls to save space and money with a single position ﬁtting 4 stacked stalls for return trip.

The ACL ULDs, which can be leased or sold, typically have an average service life of 7 to 10 years, depending on the region and customer, explained Tucker and noted that “We are actively involved in various end-of-life recycling programs with OEM’s and Operators.”

Apart from ULDs, ACL also oﬀers nets, straps, ﬁtting and corner ropes, which are very important in securing the safety of transported goods on air.

“We oﬀer a variety of diﬀerent cargo securement products. Cargo nets are an absolute necessity for 95% of the pallets used in any operations. When special cargo is involved, we oﬀer a diverse array of solutions in the form of FAA certiﬁed straps and lashings. Our unique capability to supply customers from

Adapting to the digital age, ACL also oﬀers ULDs with Bluetooth tracking devices. The company had since introduced the Find My ULD app and implemented CORE Insight’s Bluetooth logistics technology for its valued air car riers and cargo customers.

“The air cargo industry in general, and the ULD segment in particular, are now pushing stronglyahead to enhance service, accountability, reliability, and speed with new logistics technologies of various types. Ultimately,these efforts should also reduce the overall life-cycle cost of ULDs, and create end-to-end visibility in the entire ULD ecosystem for shippers of air cargo goods,” said Townes.

“The “Holy Grail” goal that everyone seems to be aiming for is tying the Airway Bill to the ULD and to the tracking device/ﬂeet control system. Accomplishing that will not be easy, but it is our next step on our innovation journey.

“These technology changes create new diﬀerentiation from a business perspective. Our view is that a market leader MUST also be a technology leader , hence our relentless investment in new systems and fresh thinking. Our customers expect this of us.”Tucker noted the ACL ULDs with Bluetooth enable customers to access important data about their shipment while it is being transported.

“We currently oﬀer ULDs that are enabled with Bluetooth Low Energy tracking technolog y . T h i s technology can provide our customers with various data points : temperature, location services, connectivity with airway bills that a l low forward facing updates to the cargo customer. In addition, we are the launch customer for VRR’s new collapsible main deck container – a true game changer in terms of ULD imbalances and repositioning,” he said.

Apart from technology and people, ACL has also invested on infrastructure. It recently opened its new ultra-modern manufacturing center in South Carolina, its home state and one of the fastest growing area in the US in the aerospace industry.

Townes said A C L ‘ s n e w manufacturing center in South Carolina replaces the original factory from the company’s legacy years. It is envisioned to be self-sustaining in the long-term through better throughput and productivity.

“We decided to keep this ﬂag ﬁrmly planted in the home state of the company, which has become one of the fastest-growing US states in the aerospace industry. With improved layouts, LEAN workﬂow designs, and upgraded capital equipment, we are estimating the new factory will quite literally “pay for itself” through better throughput and productivity. We will measure that at the end of this year, to be sure,” the ACL Chairman and CEO said.

“So although our cost of occupancy went up, the new eﬃciencies are yielding measurable savings against the same amount of work and numbers of personnel. Thus, we are gauging that our output can go up as demand rises,” he added.

even bigger than what it is now. “The new factory was the result of

strong partnering with the developer (who actually funded the bulk of the capitalization); the general contractor and its magniﬁcent team o f subcontractors; the architecture/ engineering ﬁrm who created an impressive modernistic design; plus, the real estate experts, bankers, and many others. We have a robust supply chain manufacturing capacity that now stretches from South Carolina to Germany, China, and Taiwan,” said Townes. 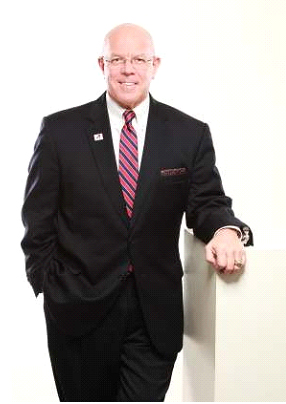 Steve Townes. A name hardly missed at West Point being the mule donor in perpetuity for the football stadium and animal mascots of the top American military school where he earned his engineering degree in 1975, the Eisenhower Award and the honor as the top graduate from the Army Ranger School.

Townes later trained with the Lanceros, the counter-guerilla forces of Colombia in South America, where he also learned Spanish.

Townes’ name is also etched at the Smithsonian National Air and Space Museum’s ‘Wall of Honor’ as “Air and Space Friend.”
But beyond that, Townes, who also has an MBA from Long Island University and PMD from Harvard Business School, is best known for his astute business s e n s e , intelligence , discipline ,humility and philanthropic deeds.
After forming in 1997 Ranger Aerospace, a private equity ﬁrm specializing in acquisitions and mergers in the aerospace and aviation industries with hundreds of millions on its portfolio, Townes continued to build on his businesses, giving jobs to people and inspiring others to make their dreams come through.

Read on his market insights on ACL Airshop, Ranger Aerospace’s latest acquisition, as the company pursues expansion across more cities and countries.US & Canada: We see steady, mature growth ahead for North America.
Middle East: For Mid-East and Eurasia, some of our fastest-growing accounts are from that region.
China: We are now in multiple cities in Mainland China and, of course, Hong Kong. This region is strategically hugely important for us. It is our fastest growing region of the world, following the cargo growth, e-commerce, demographic, and macro- economic growth trends of those burgeoning markets.
India: We have carefully explored (this year) entering the Indian sub-continent. We are selecting Handling Partners for several of the main cargo hubs, and hope to be making announcements sometime in 2020 about our next steps in India.
Europe: Like N. America, Europe is a steady, mature market for us. We continue growing, however, with new footprints of important activity in sites such as Liege Belgium and Milan Italy. Our primary hub for Europe and all international operations remains Amsterdam.
Africa: We have one support site in Kenya, and have been exploring others in cargo-heavy sites in Africa. Our growth there will depend on the factors that drive each of our airport support expansions: customer pull, cargo tonnage, numbers of ﬂights, repairs requirements, competitive situation, and “Top 100” as our preference.
Latin America: We have grown aggressively in Latin America in the past few years. The city pairings with Bogota, our ﬂagship location, are remarkably robust across the region as well as to other continents. We are enthused about adding more cities to round-out our operations, from key airports of Mexico all the way southward across the S. American continent, focusing on our criteria for ﬂights, tonnage, customer pull, repairs, etc.
Asia: Without doubt, this has become our fastest- growing worldwide region. Just 5 years ago we had one strong outpost at Hong Kong. Now we have 16. Others are planned in key hubs of the Asia-Paciﬁc theater, including India. The entire ACL Airshop team has done a phenomenal job in expanding our footprint and service network in Asia. Despite current tariﬀ wars, we are conﬁdent about the continued long-term growth for our business in Asia-Paciﬁc.