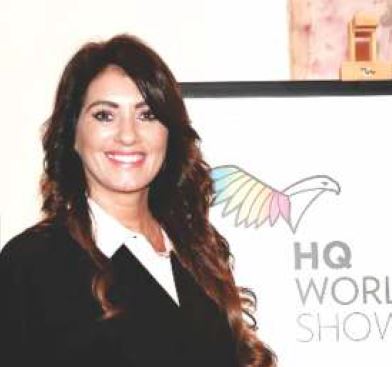 A visit to Dubai leads to
a global events company

“Never be afraid to ask for help. Ask people. Reach out. Have mentors around you. Surround yourself with people who are better than you and learn from them. We’re all learning every day.”

Katie Viera was a young marketing specialist when she first came to Dubai in the 1990s for a British trade mission.
Going back and forth to the UAE for different assignments, she fell in love with the country and decided to take a chance. She set up her own events company, the HQ Creative, with a local partner and two decades on, it’s now one of the largest in the Middle East.

“I came back and forth and decided that I wanted to be here. I actually reached out to one of my clients. You need a local partner and so I spoke to a client and we became partners in the initial company,” Viera recalled. “It was just me and a secretary and a designer and about three months later an accountant. So we were a very tiny team. Our first major production was the Silver Jubilee anniversary in Abu Dhabi in 1996.”

After its major production, HQ Creative had been entrusted to handle even bigger and more grandiose events like the 41st and 44th UAE National Day Celebrations, the RTA Metro Dubai Launch, the Etihad Museum Opening, the Zayed Heritage Festival, the State Visit of HM Queen Elizabeth II under the Crown Prince’s Court of Abu Dhabi, Dubai International Financial Center’s annual celebrations, among other major projects.

Producing these spectacular events feed the cargo industry with lots of business as creating them require so many supplies and other production materials.

Lights, sound and AV kits, among others, had to be flown by plane to save time and protect them from damage.
Last February, HQ Creative merged with Worldwide Shows Corporation, a global leader in international events, live entertainment and communications industry based in Milan, Italy.

The merger resulted to the formation of HQ Worldwide Shows (HQWS) which is now the largest events company in the region and is expected to produce major shows in Dubai with Expo 2020 coming.

For those who are seeking to make it big in Dubai, Viera, the managing partner & chief creative officer of HQWS, said it pays to be bold.

“Always follow your heart and make sure you got your head with you. I’ve always been a dreamer. Don’t be afraid. Be brave. I think bravery is really, really important. You dream something and you do it and make it happen,” she told Air Cargo Update.

Another key philosophy in making it big: Never be afraid to ask for help.

“Never be afraid to ask for help. Ask people. Reach out. Have mentors around you. Surround yourself with people who are better than you and learn from them. We’re all learning every day,” said Viera.
And more importantly, she said, “Be humble.”

When she’s not at work, Viera spends time just thinking.

“I like time to think and spend time with my family,” she said.

Viera said she never got the chance to travel much during her first 15 years in the UAE. But these days, she’s up for traveling with the merger.

And one of her must-see places is Japan.

“I’d love to go to Japan, the Far East. I really love new cultures,” she said. “The great thing with this partnership is I’m going to travel to exciting places.”