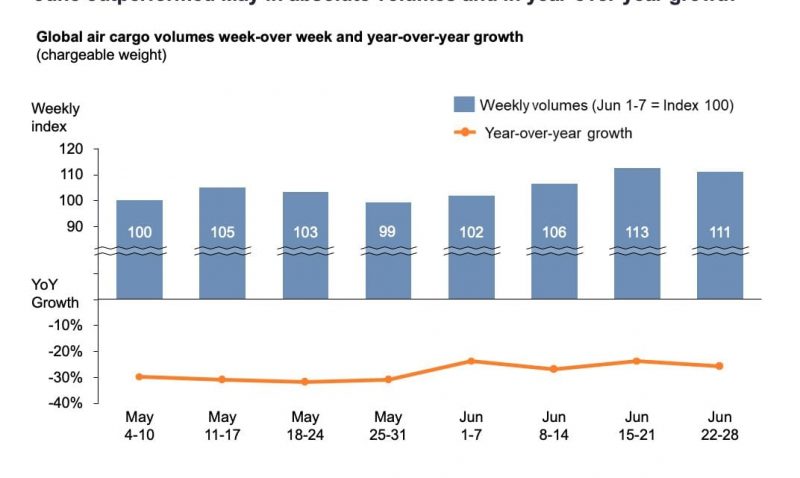 A road to recovery for air cargo industry

AIR CARGO volumes in the last week of June were 12 percent higher than in the final week of May, even though global demand for personal protective equipment (PPE) has started to decline, business analysis software company CLIVE Data Services reveals.

The year-on-year performance gap further closed with global volumes at minus 25 percent versus June 2019, in comparison with the minus 31 percent annual disparity for May, the company says.

Available capacity remained flat in this period, but the last two weeks of June saw capacity creeping up slowly week-over-week by around 1.5 percent per week.

Load factor figures of 71 percent in June were the highest level the analyst has recorded since it began measuring the industry’s weekly performance in 2018. CLIVE reports on cargo load factors using data sourced directly from airlines and which takes into account both volume and weight dimensions.

Niall van de Wouw, managing director of CLIVE Data Services, suggests a clearer picture of the state of the airfreight industry will emerge once the demand for personal protective equipment (PPE) dissipates.

“As governments around the world acted to protect their societies, they became unlikely price-insensitive customers of international air cargo capacity for urgent supplies of PPE,” he remarks.

“While our data for May and now June has shown month-on-month improvements, and airlines have been reporting peak weeks and months for cargo, the big question has been: ‘what happens when PPE volumes dry up?’ Now the noise of PPE is starting to fade, we can see where the industry is really at – and we do see an improvement.”

Van de Wouw says the company’s data analysis for June seems to suggest the first steps towards a structural market recovery. “Despite the decreasing demand for PPE in June, we still see that the volumes increased over May,” he observes. “We are starting to see a more recognizable airfreight market – [one which] follows more logical economic principles and more logical rates. The dynamic load factor in June was at a level we did not see even during normal peak Christmas periods, resulting in yields that are still well above the 2019 levels.”

In July, the air cargo industry would traditionally expect to see an influx of belly capacity for the summer holiday season. “But that’s not there at the moment. The next test will be how an influx of ‘normal’ passenger flights, which are not driven by cargo demand, will impact dynamic load factor.”

The latest report from freight and commodity derivatives inter-dealer brokerage Freight Investor Services (FIS) reveals airfreight prices on the China-to-Europe route have dropped to US$5.06 per kilo, whereas China-to-USA settled at $5.58.

“The drop-out in rates to the USA is significantly slower, reflecting continuing supportive demand and well-controlled capacity given the persistent lack of passenger schedules trans-Pacific,” says FIS’ Air Freight Forward Agreement (AFFA) report. “China-to-Europe has suffered more, with Shanghai-to-Europe the most, down by 44 cents.”

FIS broker Peter Stallion points out: “In a tale of two markets: deflated Asia-Europe air cargo trade lanes, [compared with] a fairly buoyant Asia-USA trade route. This might as well be a barometer of actual – or indeed, perceived – progress on certain regions combating Coronavirus.”