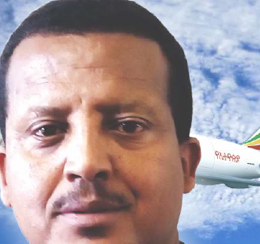 Holding the distinction as the only African nation to defeat the European colonial power in the 19th century, Ethiopia, the continent’s oldest independent nation where coffee beans were first grown, continues to break new grounds, defying stereotype notions about the region and its people.

Its economy had consistently posted growth of between 8 to 11 percent for a decade in this century, making it the 5th fastest growing economy among the 188 member nations of the International Monetary Fund (IMF).
As the only African country that was never colonized, except for five years (1936-1941) under Italy’s Mussolini regime, Ethiopia was primarily ruled by Monarchs until their defeat by the Soviet-backed Marxist-Leninist military junta, the Derg, in 1991.
The country’s history is ripe with stories of bloody battles between ethnic groups, poverty, great depravation and a record famine that led to the death of approximately more than 400,000 Ethiopians.

But in each tragedy, Ethiopia rises stronger and better.

Today, Ethiopia is one of few countries in Africa where business is nurtured with great prospects for the future despite many challenges.
“Conflict, corruption, and lack of proper system to utilize Africa’s abundant resources make development elusive,” said Fitsum Abadi, Managing Director Ethiopian Cargo Services, told Air Cargo Update in an email interview.

“However, as you know, emerging markets have moved from BRICs to PINEs and I believe we will see more emerging markets in Africa apart from Nigeria and Ethiopia in the forthcoming years, beating the challenges circling the region. Don’t forget that for the rest of the world, the untapped Africa is becoming the only playground for their sustainability in natural resources,” he added.

The country’s flag carrier, Ethiopian Airlines, which has been around for over 70 years is leading the quest for the elusive economic prosperity.

The airline is undeniably a vital link to a more globalized business-friendly Ethiopia with its passenger commercial and cargo flights leading the country’s export earnings from coffee, gold, leather goods and processed agricultural products.

In the fall of 2015, Ethiopia’s government drafted the 2016-2020 five-year plan known as the Growth Transformation Plan (GTP II), which prioritizes the manufacturing sector and new infrastructure projects.

The IMF was happy with Ethiopia’s economic plans describing it as “on course to deliver remarkable socio-economic gains, and the authorities are committed to mobilizing the required financing for sustainable development.”

“Consistently strong economic growth over the past decade and a broadly stable macro-economic environment has placed Ethiopia among the top performing economies in Sub-Saharan Africa. With broad-based expansion and increased diversification of the economy, growth has been rendered increasingly inclusive and employment-generating. Poverty has reduced significantly and the income gap narrowed substantially,” the IMF said.

In April this year, Ethiopian Cargo will unveil its state-of-the-art new hub in the nation’s capital Addis Ababa costing $150 million. Many experts view this project as the gateway to more business opportunities for Ethiopia and other countries in the region.
“Air cargo is extremely vital for African economic growth as one-third of the countries in Africa are landlocked. Fresh and organic produces for export, which are time-sensitive, could only be moved with air. Electronics, textile and trader cargo movements could support the growth in every country’s GDP which are mainly transported via air,” Abadi pointed out.

The new Ethiopian Cargo Terminal, scheduled to be in operation by April 2017 can carry up to 1.2 million tons of cargo, and is even equipped with facilities for perishable goods.

It can also handle up to eight B747-400 freighters at any given time.

“Upon completion, our uplifting capability will be equivalent to the cargo terminals at Amsterdam Schiphol, Singapore Changi or Hong Kong,” said Ethiopian Airlines Group CEO Tewolde Gebremariam in a statement.

The new cargo terminal is part of Ethiopian Cargo’s Vision 2025, aimed at supporting the country’s quest for modernity in an export-driven economy.

Gebremariam said “2016 has been an exceptionally challenging year for the African Aviation industry. Commodity exporting countries in general and oil exporting African countries in particular have been hit hard by the global decline of commodity prices. As a result, demand for air travel has been suppressed and the shortage of foreign exchange has severely affected the financial performance of airlines in the continent.”

“Yet, at Ethiopian, we are very proud of the new heights Ethiopian has flown in the year: we celebrated our 70th anniversary, inaugurated the largest and the finest Aviation Academy in Africa and a state-of-the-art In-flight Catering facility which is the largest in the continent of Africa, introduced Africa’s first Ethiopian Airbus A350, and spread our wings to more countries on 5 continents,” he added.

For many nations in the Middle East and Africa, Dubai plays a major role in doing business with the rest of the world.
This is especially true for Ethiopian Cargo as it levels up with competitors in an open market.

“The ADD-DXB route for Ethiopian Cargo is very important as Dubai is the gateway for African entrepreneurs to international markets, including those across the Middle East, Europe and Asia,” explained Enquanhone Minyashal, Manager Ethiopian Cargo Gulf.
Through Dubai, African businesses ship out perishables, flowers, and other raw materials.

Likewise, the emirate is the jumping point where they import electronics, oil and petroleum products, machineries and other personal necessities.

Abadi said Dubai and the rest of the Middle East will remain important partners of Ethiopian Airlines and Cargo in the global aviation industry.

“Ethiopia’s trade relations with the Middle East are still growing, especially in terms of agricultural products. Investors in the region prefer Ethiopia as their investment destination which will also boost the current level of trade between them,” he said.

In fiscal year 2015/2016, Ethiopian Cargo flown some 346,120 tons, up by more than 17,000 tons compared to the previous year—a sign of more flourishing years to come with the right formula and attitude.

Apart from expanding the cargo terminal, Ethiopia is gearing up for the modernization of its airport in the capital, also due for completion this year.

The project will allow the airport to accommodate as many as 25 million passengers. By 2025, Ethiopia envisions to open up a new airport, equipped with the latest technology and modern facilities.

Domestic airport network is also being expanded to have at least 19 airports to reach the remote desert and mountainous areas of the country.

Plans are also afoot for an electric railway network connecting Ethiopia to its neighbors, with a link to the Port of Djibouti.
Ethiopian has also built the largest and the latest Aviation Academy in Africa, with an investment of $100 million.

Gebremariam said connecting their brothers and sisters in Africa is the only way to move forward.

“Looking beyond the current economic slowdown especially in the oil export dependent economies of Africa, we firmly believe that the continent will become the magnet for foreign direct investment, trade and tourism, which are the engines of air travel growth and in turn efficient air connectivity also drives socio economic development and we are happy to contribute our share in the 21st Century African Transformation,” he concluded.