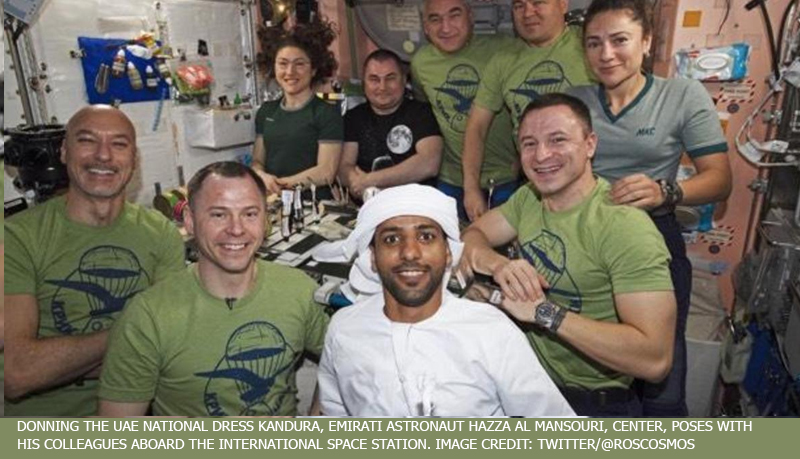 16 experiments in space for first Emirati astronaut in ISS

DUBAI/ISS: After successfully lifting oﬀ to the outer space on Sept 25 aboard the Soyuz MS-15 spacecraft with veteran American and Russian astronauts, Hazza Al Mansoori, the ﬁrst Emirati and Arab astronaut to reach the International Space Station (ISS), began working on 16 scientiﬁc experiments he was commissioned to do.

On Sept 29, Al Mansoori shared a series of photos with the team at the Mohammed bin Rashid Space Centre (MBRSC) while conducting an experiment on bone status indexes, body composition, and endocrine regulation in astronauts. This experiment on Osteology is conducted in cooperation with the Russian Space Agency Roscosmos reported the Emirates State News Agency WAM.

Al Mansoori and Russian cosmonaut Oleg Skripochka were pictured using the station’s equipment to conduct the experiment. The Emirati also appeared in a photo calculating his body mass index to study the impact of microgravity on bone density.

Al Mansoori regularly communicates with the Emirati engineers at MBRSC’s ground station in Dubai and Russia’s Mission Control Centre, to brief them on his scientiﬁc experiments and daily routine, and send pictures and videos, while on board the ISS.

Six of these experiments will be conducted in microgravity, and the results of the two environments will later be compared. The experiments include studying the reaction of vital indicators of the human body aboard the ISS, as well as other physical, biological and chemical experiments.

“…for the ﬁrst time, an Emirati astronaut travels to the ISS, carrying the ambitions of the entire Arab region. We congratulate him and congratulate ourselves for being blessed with a country that motivates its youth to reach the highest positions and achieve their aspirations, by supporting them and turning their dreams into a reality that would make every Emirati proud.”