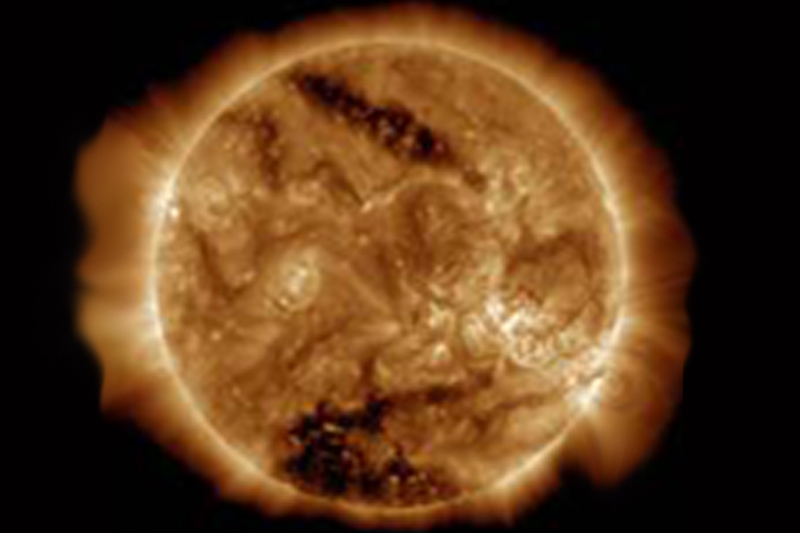 NASA’s Solar Dynamics Observatory (SDO) marked its 10th year in space in February 2020. The spacecraft has kept a constant eye on the Sun, studying how it creates solar activity and drives space weather, that impact the entire solar system, including Earth.

Here are a few highlights of SDO’s accomplishments since its launch on the outer space on February 11, 2010.

1. Fantastic Flares: SDO has witnessed countless astounding flares — giant outbursts of plasma released from the solar. In its first year and a half, SDO saw nearly 200 solar flares. Scientists said around 15% of the flares had a “late phase flare” that would follow minutes to hours after the initial flare. By studying this special class, scientists gained a better understanding of just how much energy is produced when the Sun erupts.

2. Solar Tornadoes: In February 2012, SDO captured images showing strange plasma tornados on the solar surface. These tornadoes were found to have been created by magnetic fields spinning the plasma. They could rotate at speeds up to 186,000 miles per hour whereas Earth tornadoes only reach speeds of 300 miles per hour.

3. Giant Waves: The churring sea of plasma on the solar surface can create giant waves that travel around the Sun at up to 3 million miles per hour. Scientists suspect these waves are driven by coronal mass ejections, which spew clouds of plasma off the surface of the Sun into the solar system.

4. Combustible Comets: Over the years, SDO has watched two comets fly by the Sun. In December 2011, scientist watched as Comet Lovejoy managed to survive the intense heating as it passed 516,000 miles above the solar surface. Comet ISON in 2013 didn’t survive its encounter. Through observations such as these, SDO has provided scientists with new information about how the Sun interacts with comets.

5. Global Circulation: Having no solid surface, the entire Sun is continually flowing due to the intense heat trying to escape and the rotation of the Sun. Moving about at the mid-latitudes are large-scale circulation patterns called Meridonial circulation. SDO’s observations revealed that these circulations are much more complex than scientists initially thought and are linked to sunspot production.

6. Predicting the Future: The Sun’s outpouring of material from coronal mass ejections, or CMEs, and the solar wind speed across the solar system. When they interact with Earth’s magnetic environment, they can induce space weather, which can be hazardous to spacecraft and astronauts.

7. Corona! Dimmings: The Sun’s wispy superheated outer atmosphere — the corona —sometimes dims. Scientists studying coronal dimming have found that they are linked to CMEs, the main drivers of severe space weather events that can damage satellites and harm astronauts. By linking coronal dimming to the size of CMEs, scientists hope to be able to study the space weather effects around other stars, which are too distant to directly measure their CMEs.

8. Death and Birth of a Solar Cycle: With a decade of observations, SDO has now seen nearly a
complete 11-year solar cycle. Starting near the beginning of Solar Cycle 24, SDO watched as the Sun’s activity ramped up to solar maximum and then faded to the current ongoing solar minimum. These multiyear observations help scientists understand signs that signal the decline of one solar cycle and the onset of the next.

9. Polar Corona! Holes: At times the Sun’s surface is marked by large dark patches called coronal holes where extreme ultraviolet emission is low. Linked to the Sun’s magnetic field, the holes follow the solar cycle, increasing at the solar maximum. When they form at the top and the bottom on the Sun they’re called polar coronal holes and SDO scientists were able to use their disappearance to determine when the Sun’s magnetic field reversed — a key indicator of when the Sun reaches solar maximum.